Class of 2022: Daisy Lane, Helping Students to the Voting Booth 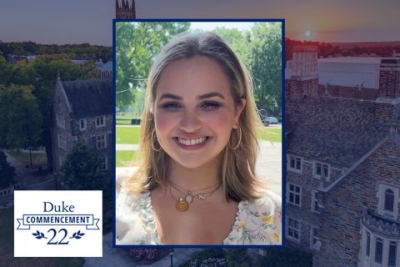 There’s a common misconception about student voting that after four years of deep engagement on the topic senior Daisy Lane wants to clear up: Students aren’t politically apathetic.

“College students vote at lower rates than most other age groups, and the general conception is they care less, but that’s not true,” said Lane, a public policy and history major who worked with the student voting group Duke Votes.

“The thinking is they’re only on campus for four years, their home is elsewhere and there’s a lot of student apathy. But I’ve spent much of my four years here talking to students about politics and voting and what has always been clear is that students care a lot and they want to vote.”

There are, however, several factors that depress student voting, Lane said. Through DukeVotes, she and other students played valuable roles in helping students through those obstacles, particularly during the 2020 election.

There’s no conspiracy, but it is true that election rules seem particularly designed to be complicated for students.  In this year’s election, first-year students living on East Campus will vote in one Durham polling place, while during the fall general election, they will have to vote in a different site once they move to West Campus.  That’s assuming they remember to re-register to vote after they move, and assuming that they remember to put in their campus box mailing address on the registration form in addition to their campus address. Failure to put in the student’s mailing address is one of the largest reasons why student ballots are rejected.

“Many people don’t understand how confusing the voting process can be for a college student,” Lane said, adding that student votes have a higher than average rejection rate.  “Most students are voting for their first time, they’re away from their home community, and they have to figure out where do I vote, how do I vote and the many steps involved.  Particularly for new voters, the logistics can be a deterrent.”

But even more of a factor can be intimidation, although not the kind of voting intimidation that makes the headlines. Lane said as much as students want to vote, many confess to deep anxiety in voting for offices where they haven’t done a deep dive into the candidates.  Students, she said, feel more comfortable when “they have a paradigm of knowledge.”

“I have spent a lot of time asking students why they don’t vote, and the biggest answer is they don’t feel ‘super educated’ about all of the candidates,” she said. “We expect to have this kind of knowledge and not knowing how to get it can make voting intimidating.”

For the past several national and local elections, DukeVotes has helped students overcome these obstacles, by providing resources to help them maneuver through voting registration and learn about the candidates.

It’s been a success story, based on student turnout and large turnouts at on-campus early voting sites. In the 2020 election, 12,694 voters cast ballots at Duke’s early voting site, setting the record for the campus site. Election officials attributed the numbers to the efforts of DukeVotes and other campus groups.

A Charlotte native whose taste for politics started young following the interests of her politically minded mother, Lane came to Duke looking to incorporate political activism in her studies.  She found her niche after a meeting with B.J. Rudell, then associate director of Polis, a center of political leadership at the Sanford School of Public Policy.

Learning about her interest in voting issues, Rudell directed her to DukeVotes. There she found a group of students then led by Jessica Sullivan who shared her passion.

“I came in as someone very interested in politics and thinking about that as a career, but what I loved in DukeVotes is I would be with engineers, computer scientists, others from other majors who had no direct connection to politics.  What we shared is everyone felt very passionate about the nonpartisan right to vote.

“And many of us are women. One of my friends was very business oriented, but she was passionate about creating space for women to talk politics without being talked over.”

Lane has political leanings, but she believes in building bridges and talking with people with different beliefs. In both DukeVotes and in her classes on politics and public policy, she had a lot of experience in talking to voters from across the political spectrum.

“That’s important to me. One of the things Professor Peck talked about was establishing yourself as open and non-judgmental. Give a little bit of grace to the person you’re talking to. Understand that if they offend you, they do it not to hurt you, but because it comes out of their lived experiences. If you show grace, it’s amazing how often people open up, even if they disagree with you.”

Lane’s ultimate plan is to attend law school, but immediately after graduation, she’s set to move to Seattle, where she’ll work as an analyst in career consulting for Mercer.