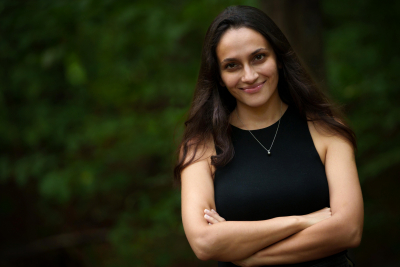 Sarah Balakrishnan studies land use in Ghana. But really that means she studies what’s missing from the story of history. (John West/Trinity Communications)

The history we are often familiar with is rarely the whole story.

That’s what Sarah Balakrishnan wants students to understand, especially as it pertains to the history of Ghana and West Africa more generally. Some histories haven’t been well preserved or thoroughly researched. Some, over time, become mischaracterized to Western audiences through colonial leaders and racist myths.

One overlooked aspect of this history in particular is the relationship of people to their land, which is what Balakrishnan’s research is focused as she joins the faculty at Duke as assistant professor of History.

The impact, Balakrishnan has found, is significant. Land use is directly tied to people’s concept of home and, often literally, their ancestors.

“It’s really hard to have a stable farming community if you’re worried about other people being kidnapped and sold into slavery,” she explained.

Through studying historical farming practices, prison systems, cemeteries and other forms of historical land use, Balakrishnan shows the ways Ghanaians spatially and environmentally situate themselves prior to, during and after the slave trade.

Because there is such a lack of Western research in these areas compared to Western histories, Balakrishnan is excited to venture into the space and unravel myths — enlightening her students and informing future research on the impact of environmental spaces along the way.

“You really can rewrite these grand world narratives about private property and prisons and all these things that people have a set idea about when we just haven’t looked,” she said. “It's really amazing to be able to go into archives and come out and say, ‘We didn't know this existed.’”

African history beyond Black and white

Her interest in Ghanaian history began when she participated in a study abroad program in Ghana as an undergraduate student.

As a Canadian-Indian scholar, Balakrishnan noticed the relevance of African colonial history to Indian families like hers. She explains the historic origins of many Indian families migrating, or being forced to migrate, to Africa, and noted that Indian people still make up a sizable demographic in West African countries that were previously British colonies.

“The Indian question within African history is actually quite a big one — how countries deal with the fact that they're not just Black and white, or just Black, but that Indian people exist,” she said.

While her current research has shifted away from this initial interest, it offered her an entry point into her studies of these countries. The history of West African countries, she noted, doesn’t feel that distant from her own family’s history of colonization.

Visiting Ghana only allowed her to visualize the connection more fully. She says she never felt she has experienced being fully Indian until living in Africa.

“Because I am half white and half Indian, and growing up in Canada, I never felt people could racially identify me,” she said. “People would ask me, ‘What’s your background’ or ‘What’s your heritage,’ but I never thought people knew who I was.”

That wasn’t the case in Ghana, where the impact of British colonial rule meant that Indian was a distinct and recognizable category, separate from Black and white in a way she hadn’t experienced before.

By stepping into a new environment with a different historical context, people saw a different side of her — one that had always existed but was often overlooked.

The history professor and the fiction writer

Like many people, Balakrishnan found herself with more time in the early days of 2020 and began to reinvest in other interests.

“My postdoc at UVA went remote, and I had this moment where I thought, ‘Maybe if one fellowship is remote, I can take a second fellowship that is remote,’” she said.

And so, she did. She started an artist fellowship at Craigardan and dedicated more time to writing short stories. Within a year, her fiction writing led to a Narrative Magazine’s Best Under 30 prize.

“I do feel like I have two sides of me, the history professor and the fiction writer,” Balakrishnan said. “And sometimes it feels like two different halves of my brain, and you have to turn fiction off to write a good research article and then you turn that off to write a good piece of fiction.”

But rather than give in to the urge to do one or the other, Balakrishnan prefers to use the types of storytelling she loves in fiction in teaching history. She incorporates different types of fiction into her courses, often highlighting African authors as a means of showing students the value of understanding African storytelling traditions to better connect to their histories.

“I find it always very fascinating,” she said, noting the impact it has on helping students connect to her lectures. “When you read fiction about a time period, you see things that were said in a lecture, and they become real.

“History is also storytelling,” she said. It just looks a little different from the other side.