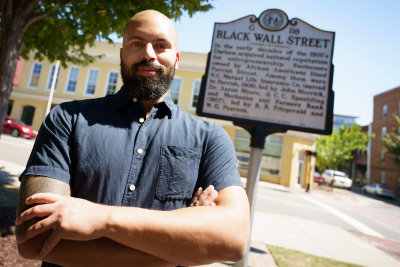 A historian of slavery, Justin Leroy is excited to incorporate local history into his research. (John West/Trinity Communications)

Justin Leroy was in the beginning of a graduate program at New York University in the summer of 2008 when it became clear that Barack Obama would become the Democratic nominee for president. Leroy recalls countless pundits talking about the move as a turning point in history.

“As I walked from the subway to my apartment, I would pass by these newsstands, and every national magazine had a cover story about the end of race and a post racial society,” he says. “And I was skeptical.”

“I think I am more pessimistic,” the new assistant professor of History at Duke shared recently. “I would see these murals or pictures of abolitionists, civil rights leaders and Obama that suggested his election would be the culmination of a centuries-long struggle.

To many, it did all seem so straightforward, as if the path to progress must be a straight line. But it didn’t make sense for the world Leroy knew to be true as a historian researching slavery and emancipation.

“That was in the back of my mind as I was studying the history of slavery,” he says. “I wondered what other kind of shapes or paths we might use used to understand history. So instead of just a straight line there are maybe, circles, ups and downs, even moving backwards.”

That idea has become the context for the research he does today — studying and teaching these connections between the past and the present while challenging the notion of a straight line through history.

Leroy views the wealth inequalities, systemic issues and the long-term impacts of capitalism we see today all through a lens of historic interconnectedness. Instead of looking at the 19th century as two distinct periods dividing slavery and emancipation, he sees the era as one marked by a continuity that cemented the relationship between race and capitalism into the systems we know today.

There was not slavery and freedom, a straightforward before and after: The barriers to economic freedom and progress that many 19th century Black people endured — and resisted — did not begin post-emancipation. They had always been present.

“When I realized that history is not static, but a conversation between the present and the past, that's when I got really pulled in,” Leroy says.

Black history in the South

Leroy’s path to Duke’s Department of History wasn’t a straight line either. He first studied film at Wesleyan University and went on to receive degrees from NYU in American Studies and Humanities and Social Thought.

After a postdoctoral fellowship at Harvard, Leroy became an assistant professor of African American studies at University of California, Davis, where he made his home prior to moving to Durham.

As a New Englander living in California for the last few years, Leroy eventually began to see a disconnect between his research and his never having lived in the South. He can joke about the heat and mosquitos in North Carolina — but he knows that real challenges come with living here.

“A lot of north-south regional identity is bound up in stereotypes and how different you are from the other, so I never really thought of the South as some place I would want to live,” he says.

He joins Duke not only excited at the opportunity to take part in all of Duke and Durham’s traditions but to enmesh himself in a culture that has many historical ties to his research.

So much of the modern story of Southern places is owed to the histories Leroy studies. With historically significant sites within Durham, like downtown’s Black Wall Street district and the Historic Stagville plantation, Leroy has research locations right at his fingertips.

“I could never do that before,” he says, noting his eagerness to take students on local research trips.

Bringing his new perspectives to this historically rich place is exciting for Leroy, and his past experience studying in archives has helped him see his perspective as valuable.

He shared that after he would spend time with the archives and primary sources that he had previously only read about, there were things he saw differently from what researchers had described.

“That’s not to say that other scholarship is bad or wrong,” he says, “but it really made me realize how much the perspective of a researcher influences how we look at documents. I think the idea that research is purely objective is usually not the case.

“How you look at the past changes depending on your present. That's always been the case.”

There may not be a straight line through history, but scholars like Leroy know it is all connected.